There are three types of termite treatments in new construction

They are soil treatments, bait stations and wood treatments. Only the use of these three methods using an EPA-registered product that is labeled as a "primary" new construction treatment will satisfy HUD, FHA & VA requirements and the requirements of 2016 International Building Code. 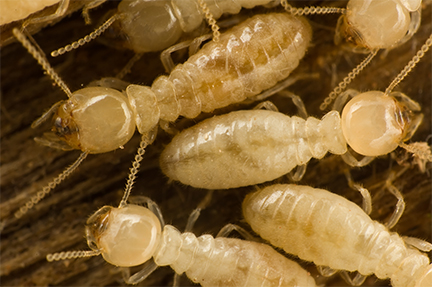 Soil treatments are the oldest form of termite treatment. 200-400 gallons of liquid termiticide are pumped into the ground under the slab and around the foundation.

These treatments can last 5-10 years but must be repeated to provide continued protection. That means that a home that lasts for 100 years would have 2000 gallons of termiticide pumped into the soil around and under the structure during its lifetime. In addition to the environmental issues, there is also the problem of soil not being consistent so as the termiticide is pumped into the ground, it may not cover evenly and leave gaps in protection. Breaks in the chemical barrier can also be created during landscaping. Finally, soil treatments cannot be applied if it is raining or rain is expected, which can cause delays in construction. In fact, one national builder found soil treatments were causing an average of one day of delay in their production cycle.

Bait stations are another type of treatment and are placed directly into the ground surrounding a structure. These stations contain cellulose that has been laced with an insecticide, that kills the termite workers if a foraging termite happens to run across one of the stations.  To put this in perspective, if termites were the size of humans, the bait stations would be placed seven football fields apart and don’t forget, termites are blind!  There are many cases where termites simply bypass the station and never come into contact with the bait, as you can see in this video.  In addition, recent studies using DNA testing show that colonies are not eliminated, but simply move.  And if the homeowner does not renew the service, the bait stations are removed, leaving the home with no termite protection at all.

Wood Treatment
You have only one chance to give your house this protection. During the dried-in phase of construction, give your homeowners a termite treatment that will provide long-term residual protection instead of a monitoring system that they will have to pay for every year...forever! 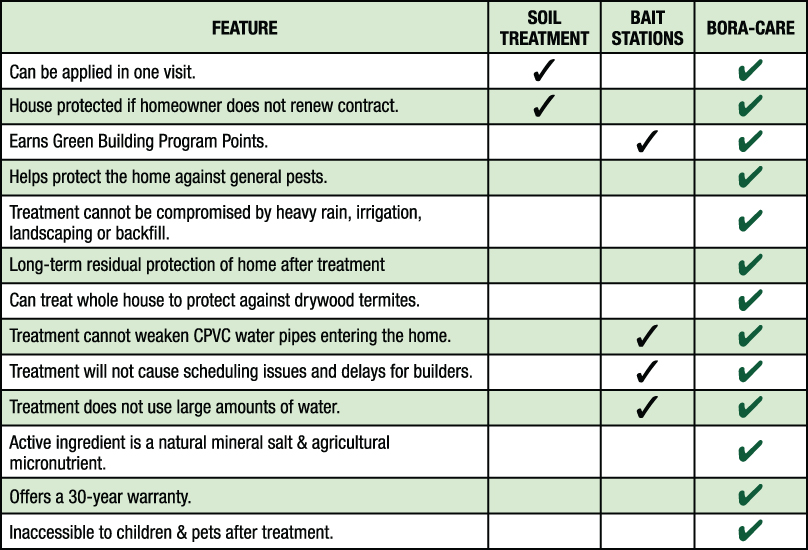 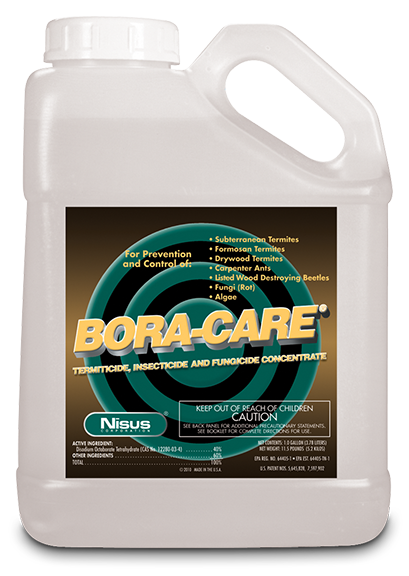 10 Smart Reasons to Use Bora-Care:

Applied to more than 1.5 million homes, Bora-Care has been proven to last longer than soil termiticides and can earn you points under most green building programs.

There has been a dramatic shift in the way builders treat for termites in new construction. In the past, pest companies would pump soil termiticides into the ground. These soil termiticides need to be reapplied in as little as five years, or if the barrier is broken by activities such as landscaping. Bora-Care eliminates the need to pump chemicals into the soil at your home sites. A Bora-Care termite treatment can also speed up production because there is no need to treat the soil before the concrete is poured.

Nisus offers the Bora-Care 30-Year Limited Warranty to pest control companies who register treated homes and inspect them annually. This damage repair warranty, which is extended to the pest control companies, gives builders and homeowners peace of mind knowing their homes can be covered under the limited warranty for the length of a standard 30-year mortgage. A Bora-Care treatment can help protect a home from subterranean termites. A whole house treatment can also be done to help protect the structure from drywood and Formosan termites, which can enter homes through windows and attics.

Check to see if termite treatments are required in your area.
Find A Pest Company
Buy Now

* Must be applied by pest company in order to get termite letter on new construction.
* Homeowners can apply to bare wood - read entire label before application